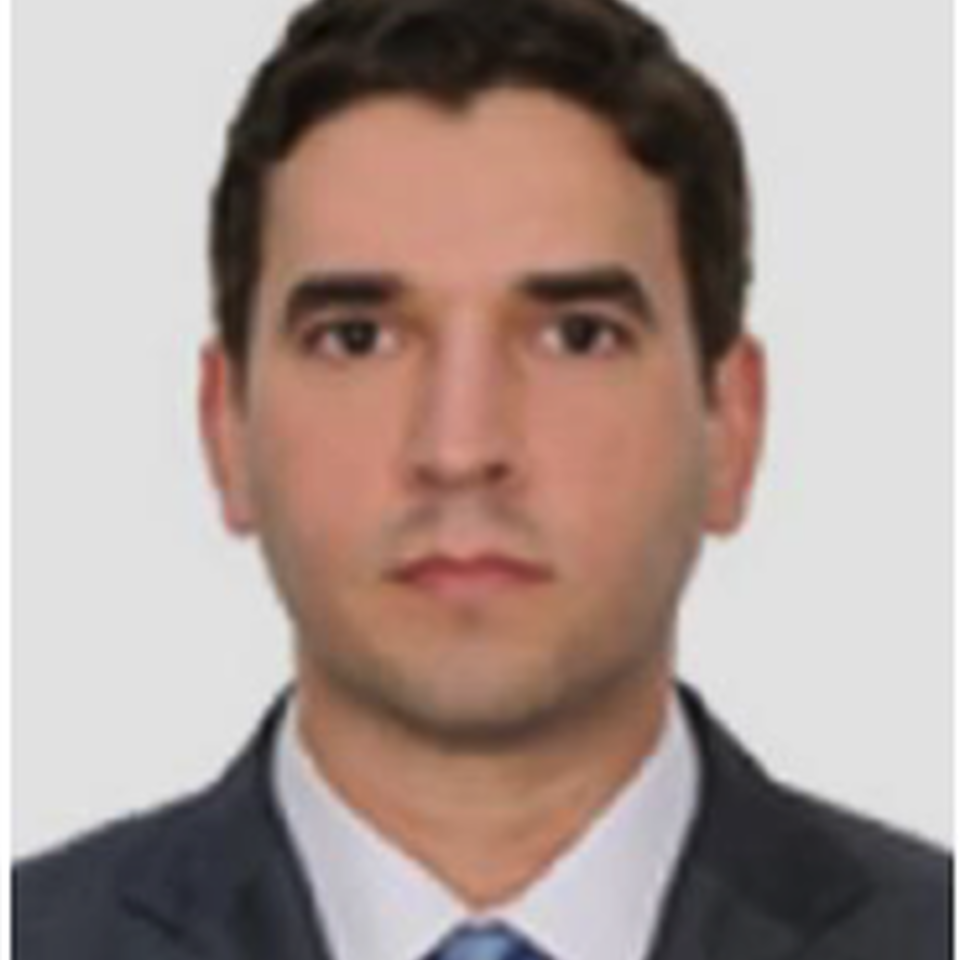 The following case study will describe the events occurred in Ras Tanura Refinery centrifugal compressor (410 K-1). The plant where the compressor operates is designed to produce Natural Gas Liquid (NGL) from a mixture of sour gases from the crude stabilization and refining process. The compressor has presented an abnormal behavior with constant changes in lX vibration amplitude and phase, noticed through the data collected in the on line vibration system available in place. The major fluctuation was concentrated at the compressor outboard bearing. The plots collected were analyzed by the vibration specialist and revealing rub, this abnormal behavior will be explained in the content of this technical paper. The portable data acquisition system was connected to the Bently Nevada Panel, to collect high resolution data and obtain more information for analysis.

The machine to be analyzed is a Two Stages Centrifugal Compressor, driven by a Steam Turbine, whose normal operating speed is ranging between 3,400 to 3,800 rpm and Critical Speed at 6000 rpm. The train is monitored using X, Y proximity probe pairs on each radial bearing (sleeve bearings).

In October 2017, a vibration level increase was noticed on the compressor at the outboard bearing close to 2 mils (Fig 2). During that opportunity the dynamic data was analyzed identifying a possibility of rub in that compressor's area. During a maintenance window it was decided to inspect the bearing and replace them due to Babbitt deterioration caused by the ingress of water (found in the lube oil sampling report) and solid particles in the lube oil.

High ΔP was observed at Steam Turbine and Compressor lube oil system (common lube oil system for both ST and compressor). During the inspection, it was observed clogged filters along with big rusted particles attached. The compressor outboard seal was suggested to be replaced since they operate with the same oil used for the bearings, but unfortunately it was not possible to replace them due to operation needs and unavailability of spare parts.

The compressor was back on service on November 2017 and after two months of operation it started to behave in a similar way as previously, but in that case with more frequent vibration events, exceeding this time 3 mils (Fig 3).

The predominant amplitude during the vibration event was noticed at the compressor running speed (1x Frequency) in steady state, as it can be observed in the below full spectrum waterfall plot (Fig 4). To investigate the potential root causes affecting the vibration response, it was required to dig down in other plots to explore the nature of the problem.

The overall vibration and 1X amplitude was aggravating as the time passed. A five (5) days compressor trend was pulled out from the data collector in the outboard bearing (Fig. 5). The trend displays how this phenomenon became more repetitive and severe, until the point to call for a meeting with the parties concerned and plan the maintenance strategy for its intervention. 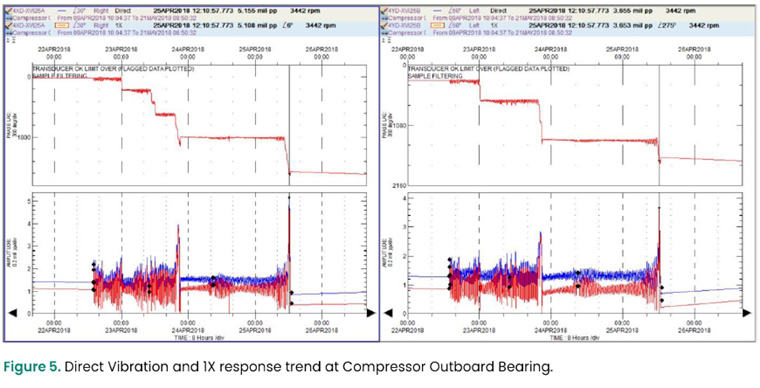 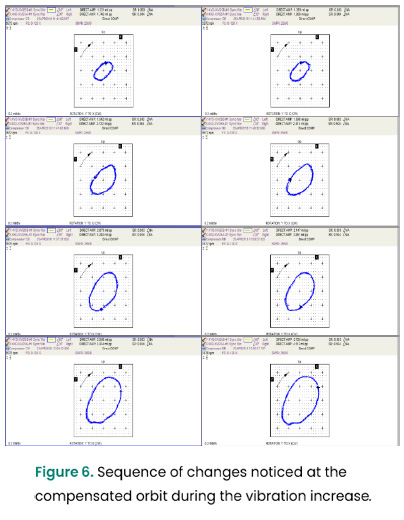 Orbits and polar plots were required to study source of the problem.  A set of orbits were collected to present the particular behavior noticed, at the synchronous response.  The waveform compensation was done in the orbit with the intention to track only the dynamic motion, and get rid of the residual run-out at the probe track area.

Notice how the orbit shape is being constantly modified (amplitude and phase angle) during the vibration event.  The constant shift at the phase angle is easily identified by looking at the key-phasor mark (blank/bright spot). (Fig 6.) 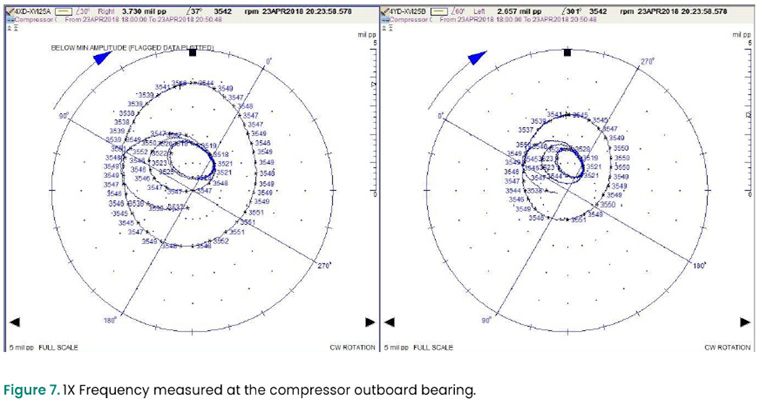 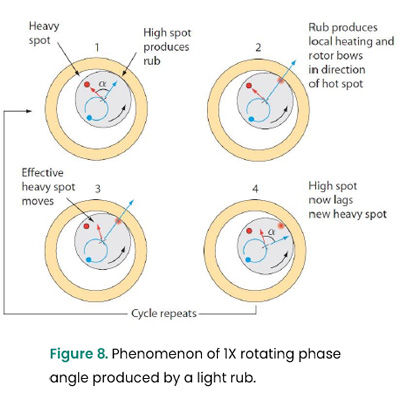 When a radical rub occurs, the heat generated from the frictional forces can locally heat up the rotor, causing it to bow, under this situation, the bow is seen as a change in 1X response, in the majority of the cases with no harmonics and subharmonics due to the friction type rub. With the correlation of the plots previously analyzed (Orbits, Polar, Full Spectrum), it is possible to identify the rub condition leading to shaft bowing.

A full annular rub can generate an orbit near to be circular with forward procession, and orbit tracking the shape of the current available clearance.  This behavior is commonly found at lubricated seals.  Knowing that rubbing is always a consequence of another malfunction, it is important to list down the potential causes that might lead to this particular problem.

At these circumstances the potential causes of rub, are listed as follows:

The contact between stationary and rotating parts take place during rubs, for this reason the shaft centerline (Fig-9) plot was also evaluated to verity any severed shaft deviation and discard any potential misalignment or any preload source that might be affecting the bearings or seals integrity.

At this occasion no major shaft movement was identified, even during the occurrence of the vibration increase, leaving room for the theory of oil contamination or carryover of foreign objects into the oil to the seal chamber.

A high possibility of presence of narrowed clearances was expected by accumulation of solid deposits, and as a consequence, to create heat enough between stationary and rotating parts, leading to a bowed shaft.  Once the rubs get release the cycle start over and over again, producing the vibration changes studied through the plots. 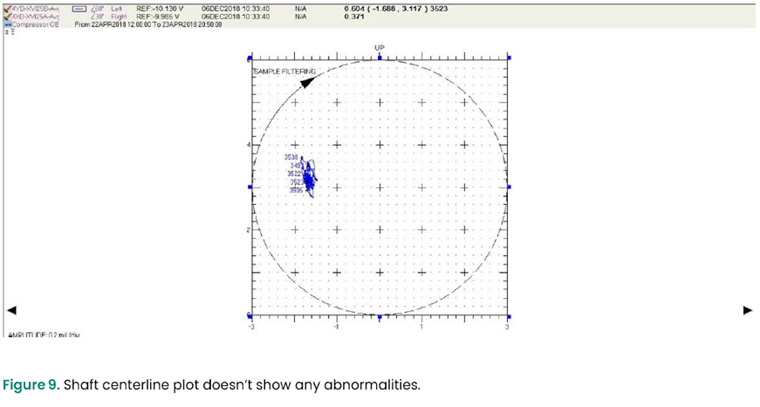 Based on the oil condition and the filter's cartridge contamination found in previous inspections (big rusted particles), along with the high ΔP in the lube oil system, and the correlation with the vibration plots analyzed during the troubleshooting process, it was concurred the possibility of ingress or solid particles to the seals or seal deterioration due to constant water contamination, identified on the monthly oil sample analysis.

Due to an obsolete and off-specification design of turbine glands and oil system, the whole train is exposed to water contamination, and frequent plugging of lube oil filters with solid particles, as found during the site survey as the graph in the figure 10.

The maximum ΔP allowed by OEM is 15 psi and, in the graph, it can be observed how steps are being developed in the ΔP trend until it reaches more than 50 psi. (Fig 10). 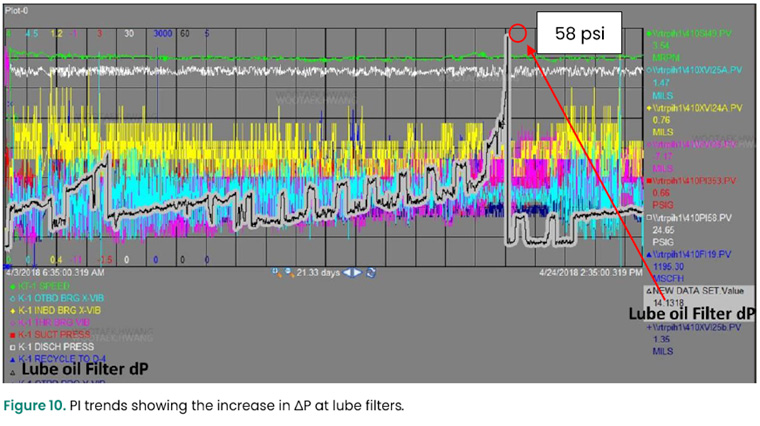 The root causes of the contamination issues are listed below:

Site inspection revealed the deteriorated seal condition observed in the vibration plots as rub. The following pictures will show the real evidence of the high vibration values analyzed by the vibration group. Seal was found severely damaged around its circumference; radially (shaft) and axially (carbo ring faces) as it can be seen in figs 11, 12, 13, and 14. 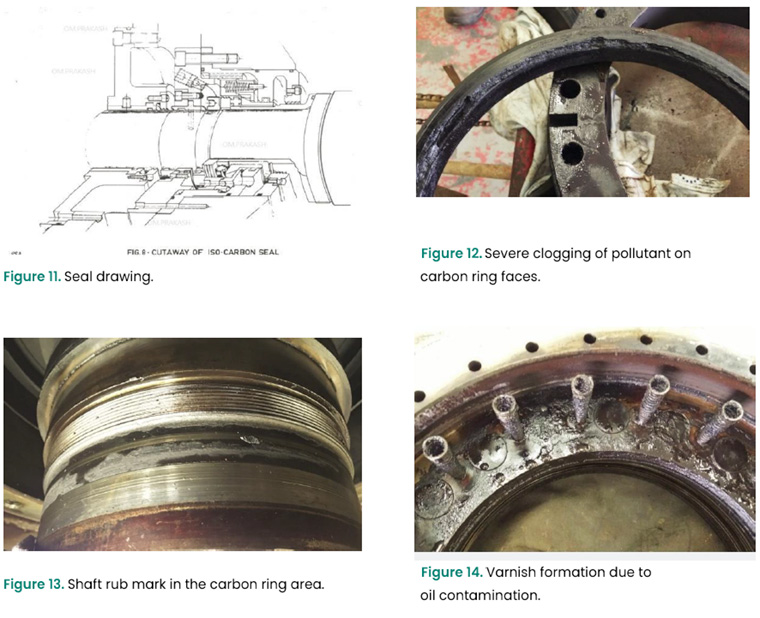 Results and conclusions after seals replacement

The compensated orbit plots indicate the positive result achieved after changing the seals in the scheduled maintenance window coordinated by the concerned parties. The vibration levels were improved significantly, as shown in comparing the values before the maintenance intervention and after the seal replacement. The orbit in the left represents the high vibration values during the rub, and the one on the right the normal vibration values.

To mitigate the root cause for the oil contamination issues, the below action items are implemented.

The 1X response is now steady and not moving 360 degrees as previous scenario.  This comparison proves that the annular rub was eradicated from the compressor seals. 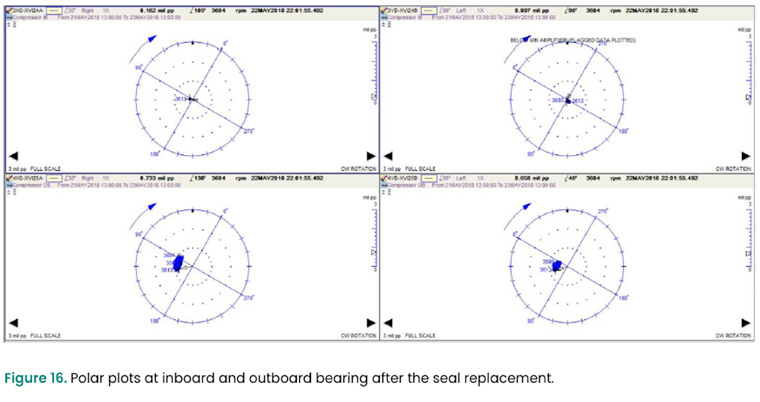 A 3-day trend was pulled out from the vibration data collector, to present the dynamic performances after implementing the seal replacement.  The machinery behavior was improved with vibration within acceptable limits and a stable phase signal.

The plots collected provided the theory of Rub-induced thermal bow, the vibration data was utilized by the rotating equipment crew to properly troubleshoot the abnormal events, and avoid a sudden machinery trip that could cause flaring issues for the plant. 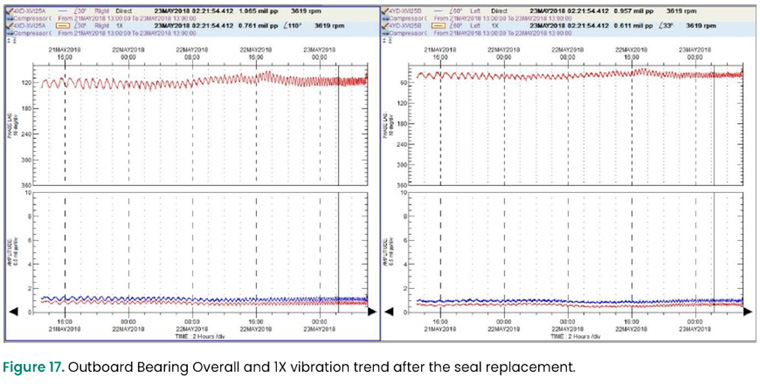 Copyright 2020 Baker Hughes Company. All rights reserved. Baker Hughes provides this information on an “as is” basis for general information purposes. Baker Hughes does not make any representation as to the accuracy or completeness of the information and makes no warranties of any kind, specific, implied or oral, to the fullest extent permissible by law, including those of merchantability and fitness for a particular purpose or use. Baker Hughes hereby disclaims any and all liability for any direct, indirect, consequential or special damages, claims for lost profits, or third party claims arising from the use of the information, whether a claim is asserted in contract, tort, or otherwise. Baker Hughes reserves the right to make changes in specifications and features shown herein, or discontinue the product described at any time without notice or obligation. Contact your Baker Hughes representative for the most current information. The Baker Hughes logo, the Bently Nevada logo, and System 1 are trademarks of Baker Hughes Company.