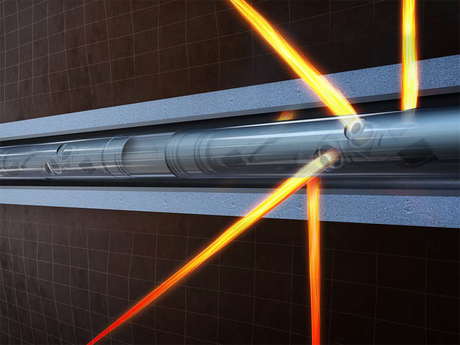 Confidently increase your clusters per stage for optimal production

The Symphoni™ addressable perforating system from Baker Hughes gives you next-generation perforating performance for your unconventional wells, lowering fracturing costs while simplifying workflows for your field crews at the wellsite.

The system design also includes features to enhance safety at your wellsite. Integrated circuitry eliminates the effects of uncontrolled stray voltage, current, and radio frequency saturation that could lead to surface detonation. This also saves you time by avoiding the need to manually control radio frequencies. And when combined with the addressable release tool from Baker Hughes, the Symphoni perforating system prevents uncontrolled surface separation.

The Symphoni perforating system is fully compatible with all Baker Hughes shaped charges, including the TrueJet™ uniform-hole perforating charges for improving reservoir communication in unconventional wells. The system can also deploy the DeepConnect™ reservoir-driven charges, which work with high-temperature explosives required in ultradeep frontiers.

Contact us to learn how the Symphoni addressable perforating system can improve the production and recovery potential from your reservoir.