This page is not translated in 한국어 so you are seeing the fallback language instead.
Image
Image
Eyebrow
Success stories

Mangla Hydro-electric power station, situated in Pakistan, has five steel-lined tunnels, each designed to feed two generating units. It includes ten vertical Francis type turbines, installed between 1969 and 1994, each having an output capacity of 138,000 bhp with a rated head of 295 feet of water.

Water and Power Development Authority (WAPDA) Pakistan initiated a governor and mechanical controls modernization project in 2007. The project went for re-bidding three times due to its technical complexities and unique challenges. Nexus Controls was awarded the turnkey contract to design, supply, install, test, and commission a new digital governor control system for two of their turbines (units 7 and 8). Nexus Controls successfully commissioned these units in early 2021 and had their efforts recognized by the customer in a formal letter of appreciation.

The existing governor system for units 7 and 8 consisted of two primary mechanical control devices: The Guide Vane for operating the hydro unit, and the Relief Valve to maintain safe penstock operating pressure levels. The guide vane control was completely manual, requiring the attention of specialized operations staff to continuously monitor and adjust the system and was prone to human error. The system also included a manual reservoir head level adjuster for setting the maximum opening of the pressure relief valve during operation and a manual irrigation valve limiter for mechanical control of the relief valve for water discharge.

The original plant design relied on mechanical linkages to interface the guide vane and relief valve controls. The project scope required retrofitting the guide vane control to a modern digital control system while preserving the existing mechanical linkage for the Relief Valve. The design required a customized digital-mechanical integration, drawing on decades of Nexus Controls experience as a leader in hydro-driven turbine-generator control and protection systems. 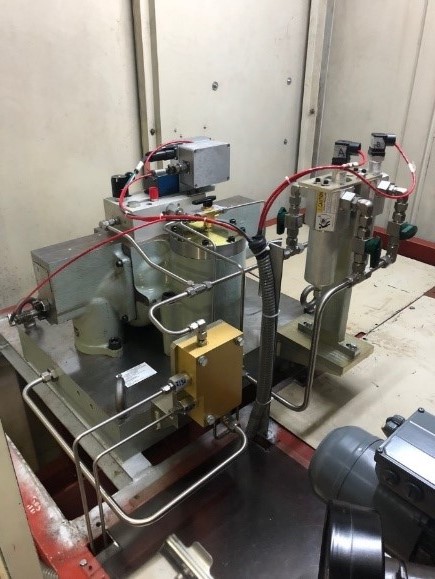 After years of planning and concept development, the aging and inefficient controls were modernized with an advanced digital system and customized mechanical solution tailored to the site's needs. The Nexus Controls team removed the existing Guide Vane distributing valve and installed a new FC5000 distributing valve designed to deliver the required oil flow to meet the servomotor timing and replaced the existing mechanical feedback with a Magnetostrictive Linear Displacement Transducer (MLDT) for position feedback, converting the system to a completely digital design.

As per the customer requirement, the mechanical linkage between the Guide Vane and Pressure Relief Valve was retained, increasing the complexity of this commissioning project due to the fact that there were multiple mechanical calibrations and adjustments required to ensure reliable operation of the relief valve. The project also included a redesign of the obsolete reservoir head adjuster assembly and irrigation valve limiter assembly to interface with the new digital controls. The modular design increased performance and reliability while improving maintainability.

The new digital control system enhanced the system reliability and operator efficiency with the following features: 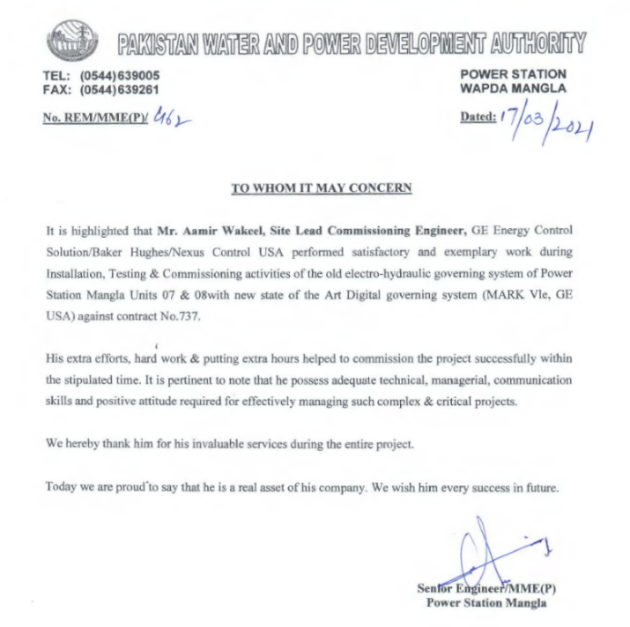 Nexus Controls engineering, services, and quality teams worked in collaboration with the WAPDA team to identify and overcome several challenges during project execution. These efforts resulted in the successful completion of the first unit within the stipulated shutdown window with the installation of the second unit being completed well ahead of the planned outage duration.

Umer Shahid, Senior Engineer at Mangla Power Station, Pakistan shared a Testimonial video, sharing his appreciation for the team on this project.

Special recognition to the following Nexus Controls team members who worked tirelessly in overcoming multiple challenges to achieve this successful result for our customer: