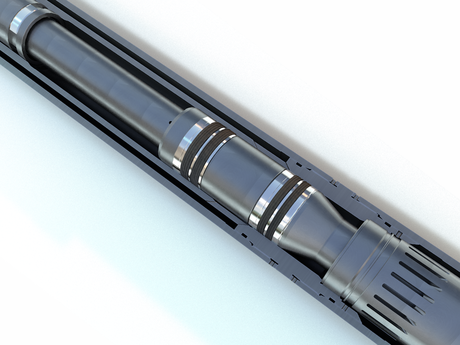 Get assured bidirectional zonal isolation, without the need for an expensive intervention, with the X-AFV recloseable annular flow valve from Baker Hughes.

When deployed in the upper interval of your multizone completion, the X-AFV isolates a concentric flow path created between the isolation string inside the screen and blank pipe assembly. You get positive zonal isolation after stimulation treatments have been completed and fluid loss control during production installation—without pressure sensitivity that could prematurely open or close the valve.

The X-AFV is hydraulically actuated by creating a preset inner diameter (ID)-to-outside diameter (OD) differential across the actuating piston. This recloseable valve actuation method you operate multiple fluid loss control valves in the same pressure cycle. And because actuation is interventionless, you can reduce both your operational risk and project costs. The valve includes a balancing feature that prevents treating pressure from prematurely shearing and shifting the actuating piston until the production seals are landed. Formation pressure has no effect on valve actuation.

Unlike a conventional annular flow valve (AFV), the X-AFV can be reclosed to isolate the production zone after production is initiated—and you can mechanically reopen and reclose the valve an unlimited number of times. The valve provides unrestricted flow paths when open to maximize your production rates.

The X-AFV is ideal for use in deepwater intelligent completions where mechanical access is not possible, deviated wellbores, completion designs with limited tubing inside diameter (ID) access, and multizone completions.

Contact us to learn how the X-AFV recloseable annular flow valve can deliver reliable, bi-directional isolation in your upper completions.